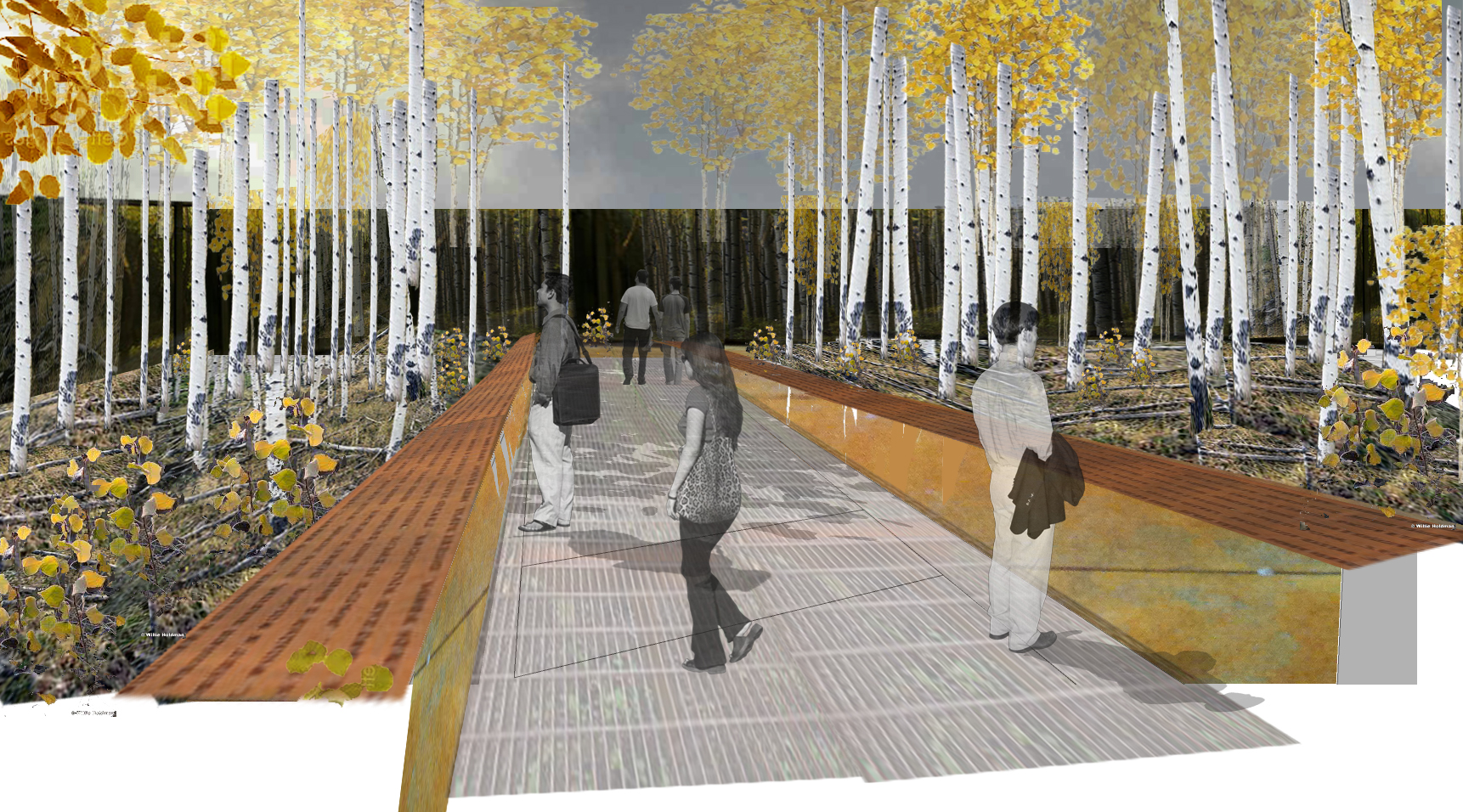 The era of AIDS heightened the sense of “otherness” as the general public became fearful of physical intimacy.

Throughout the site we propose a network of channels and tree-pits, an abstracted visual symbol for the Aspen tree’s root system. A stand of Quaking Aspen can often be a single inter-connected living organism. Pando, Latin for “I spread”, is a single colony of Quaking Aspen and is considered the oldest single organism in the world. An Aspen stand could be considered immortal as it is constantly in a state of dying and growing new life. Quaking Aspens mostly reproduce asexually by sending suckers from their extensive lateral roots.

The tree is short living but because it has an interconnected system, young, mid-life and older trees live simultaneously. This rapidly growing tree quickly colonizes bare areas.

The memorial grove is fully contained. The spreading virus cannot be destroyed so we contain and manage the disease. The memorial grove is contained in the glass enclosure. The community wants to preserve itself by making connections and adapting our behavior while the virus spreads the same way. These two opposing forces are intrinsically connected.

The entire site is an unfolding journey, park, memorial and educational center are intertwined. Each program has equal emphasis and flows from one space to the other. We are defining one single spatial and symbolic gesture by creating a networked grid that connects physically and symbolically to all aspects of programming. We are extruding the triangular configuration of the site to raise awareness of Aids as an ongoing crisis and giving the educational center a visible vertical presence and entrance. The educational center is low and sloping allowing the whole site to be utilized as park. The ramping path is always wrapping around the grove and the central media room.

The ramp to the basement doubles as a viewing gallery. The grove is also visible through the glass walled structure at street level on 7th avenue.

Within the grove the interior glass walls have one way glass so the trees are reflected infinitely. The walk penetrates the grove and then turns and slopes down until the visitor is at waist level.

The walkway ends with a light shaft connecting to the room below. The trees are planted as an urban forest, closely in places, while still allowing areas for their opportunistic roots to spread underground and create new growth patterns.

Directly under the memorial following the footprint of the grove, there is a listening chamber. Silence equals Death emerged as a strong symbol from the AIDS epidemic. A public conspiracy of silence, fear and complacency created more opportunities for disease.

AIDS, as an abstract idea, is countered by the individual narrative. Under the memorial grove there is an excavated space, a listening room for the collected stories of individuals affected by AIDS.

At night–time the building is illuminated from within. There is a changing pattern of networked LED latticing on the ground plane following the formalized grid system. The memorial grove remains in darkness – a void in the park. 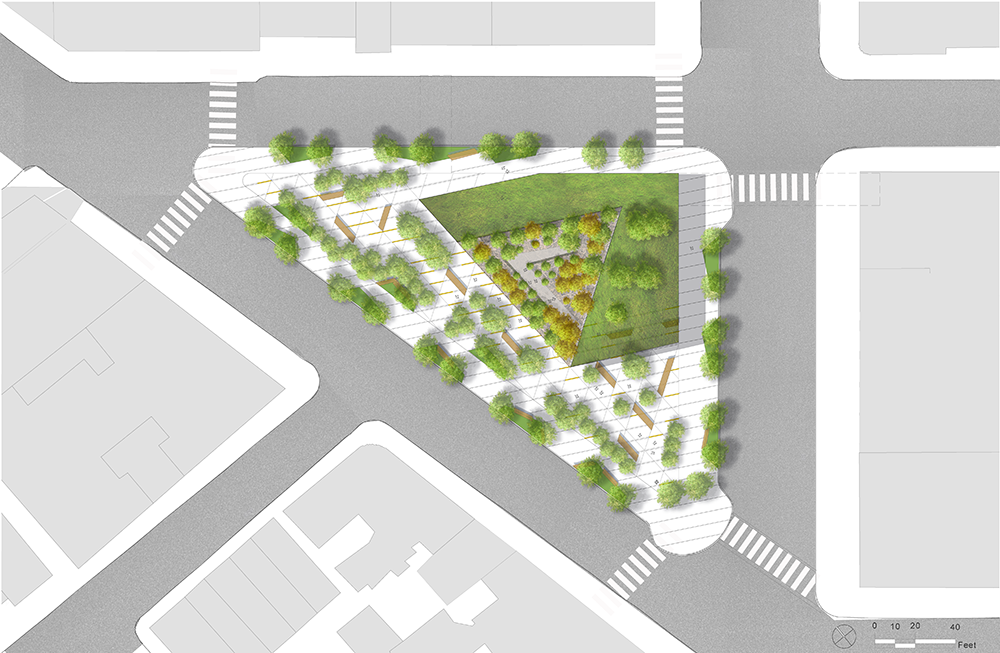 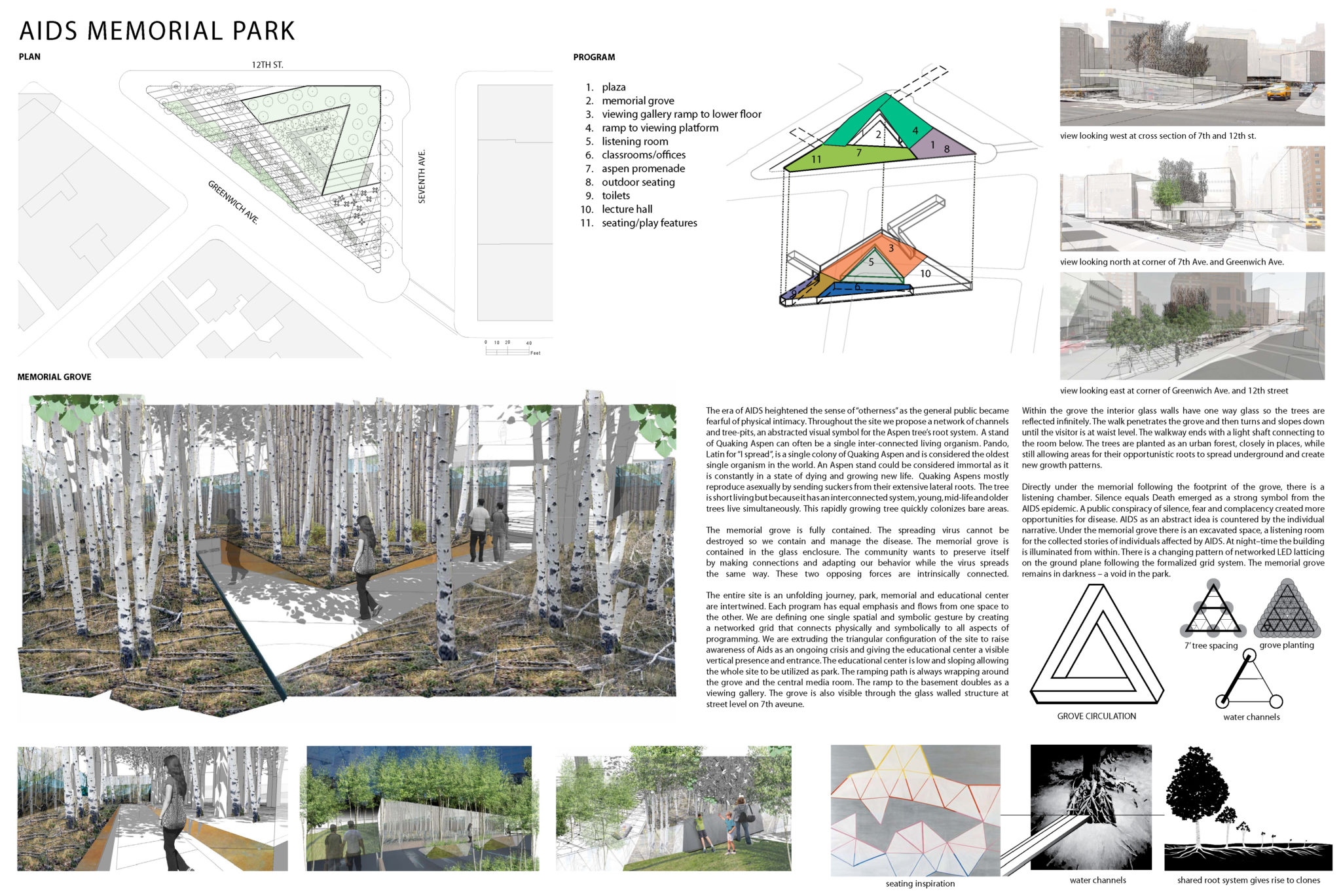